The bacon adds a definite kick of smokiness, crispiness, and flavor to the creamy, saucy mac and cheese.

This is a definite one-pot meal, including the macaroni. I have found that cooking the macaroni in chicken stock or broth REALLY enhances the flavors.

And you get to skip the draining step since you're not using water, and you're using just the right amount of broth to cook the pasta with a bit left over for juiciness.

The pasta soaks up the flavorful broth, making it more delicious than ever! (Tell me how much you love it in the comments below!)

You will cook your bacon first, and part of the bacon fat will be left in the pan to lightly saute your garlic.

This is a fantastic base of flavor that you will built upon to create an amazing mac and cheese!

The next key to making this dish as tasty as possible is to cook the pasta in the chicken stock (or broth).

As noted above, the chicken broth is measured precisely so you won't need to drain, and the pasta will soak up the delicious chicken broth flavor.

So, layer one of flavor is your bacon and garlic. Layer two of flavor is the chicken-broth-enhanced pasta. Layer three will be your cheeses, butter, and cream.

And then, layer four will be the bacon crumbles that you add at the end - YUM!

What if your macaroni and cheese with bacon is too dry?

If you find that your mac and cheese comes out dry and not as creamy as you had hoped, you can always add more broth or cream.

Watch your pot as the pasta is cooking, so it doesn't overcook and boil out all the liquid.

If you lose some of the liquid because you didn't cover the pot or for some other reason, just add more broth.

Don't add cream until the end, as you don't want milk products to boil (they will curdle and clump - instead of creating a smooth dish, it may get lumpy).

It's perfectly fine to add more cream if you find it's not as creamy as you like. Just don't add so much that it becomes soupy. You want creamy and saucy - not runny.

You may also like my Five Cheese Marinara recipe.

Other Recipes to Try: 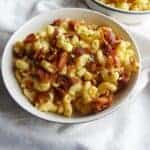 This bacon mac and cheese is so creamy and delicious - no lack of cheese or bacon in it - my most luscious mac and cheese yet.
Prep Time10 mins
Cook Time30 mins
Total Time40 mins
Course: Side Dish
Cuisine: American
Servings: 4 servings
Calories: 683kcal
Author: Savory With Soul

Don't Forget to Pin For Later! 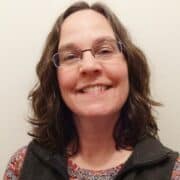